Recently I posted that I wanted to start a vegetable garden in the back yard, however I had some concerns with doing this, mainly time and the condition of my soil. If the soil in the backyard was anything like that of the front, nothing would grow in it (granted, grass grows in the backyard).

That's where this book comes in: The All New Square Foot Gardening. I just got the book yesterday, so I haven't had a lot of time to read it, but general idea is to build boxes on top of the ground, fill it with nutrient rich soil, plant, grow, pick, eat, repeat. Only planting the amount you really need is also key.

I'm hoping to start construction in the coming weeks. More to come on that. 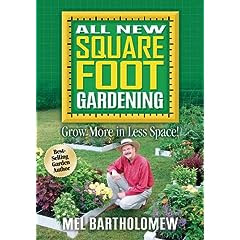 Email ThisBlogThis!Share to TwitterShare to FacebookShare to Pinterest
Labels: Garden

Yesterday was pretty wretched. Spent the majority of the time working on a project with Lakelands Orthopedic that I didn't plan on doing, it took the better part of the afternoon. While I was doing this I had people coming into my office, calling, and emailing with problems. Pretty stressful. I'm pretty much ready to find somewhere else, I just have to finish my degree and finish my certification to MCSA.

Finished watching Fellowship last night with JR. Such a good movie that was pretty close to the book. I didn't realize how different it was though, and I remember hearing a lot of people saying that when it came out, obviously I was oblivious to that.

I read John 4 today. It contains the story of Jesus talking to the Samaritan woman at Jacob's well. He declares himself as the savior to her and tells her of the gift that he has brought to the world - never ending spiritual water. The woman is surprised to hear that she can partake of this water even when she has already sinned so much, and was not a Jew. I understand this to be one of the first testaments to the purpose of Jesus' life given by him to a non-Jew. The woman brought many out of the town to hear Him and they also believed. Jesus said that a time was coming (and was already here) that anyone (regardless of race or background) who worships and believes in the Father "in spirit and truth" will have the never ending well of life.

Jesus then traveled to Galilee where he was confronted by a royal official who believed Jesus to be the Messiah. His son was deathly ill and he asked Jesus to heal him and because of his belief he was instantly healed. Because of this, he and his entire household believed.
Posted by Brian Dean at 11:30 PM No comments:

I've been working on the Baby's room this weekend, painting mainly. It's a boy, so we're painting it a light blue color called Inhale. I finished reading The Fellowship of the Ring this weekend. I can't believe it took me so long to start really reading TLOTR, but I'm doing it now so that's good.

Work has been pretty frustrating, I really don't know what I'm going to do about all of it right now, but I want to wait and see what God has in store for me. I want to keep an open mind about my career. I'm not certain that this is what I should be doing for the rest of my life, but I'm pretty certain my computer aptitude is a gift that I should be using somewhere, some how.

I've been reading the gospel of John recently and it's good to read through the book from start to finish rather than picking out individual versus as people usually do. It's easier to understand things in context. Mom gave me a new study Bible for Christmas and it has a lot of good commentary that I've been learning from. Today I read John 2 and 3. John two tells the story of Jesus turning the water into wine and Jesus visiting the temple in Jerusalem during passover to find it being used as a market. What I didn't realize about his visit to the temple was that the Jews tested his claims of being the Son. He told them to destroy the temple and he would raise it up again in three days. This was a figurative prophecy made by Jesus stating that he would raise the body from the dead after 3 days (after the crucifixion).

John three includes the telling of Nicodemus visiting Jesus at night and having a conversation of spiritual re-birth. That someone who believes in God and receives the spirit in himself is reborn. Good stuff. The other half of the chapter is about John the baptist who is baptising people when he hears that Jesus is doing the same not far away. He continues to baptize people but affirms people that he is not the messiah, but Jesus is. This is a sign of humility from John was teaching followers but told them to go to Jesus.

Mandy and I were at Food Lion tonight getting our weekly stock of various food sundry when an overwhelming urge to buy Italian Ice overcame us both (simultaneously). For those of you who are not schooled in this desert,  it's basically made using the same process as ice cream, but uses ice (shavings) and flavoring. A much more basic desert than ice cream or gelato (the later preferred of the two) and feels "healthier". It provides a cool, refreshing sensation the same way water does on a hot summer day with a creamy, light texture that's sure to please.

This week I read through Beowulf. I tried reading it when I was in middle school but couldn't really get into it (I really didn't like reading if the subject matter wasn't computer related). But since I've been reading fiction recently I thought I'd give it another go, and I'm VERY glad I did.

This tale has such scope and epic details that I was completely enthralled from start to finish. It makes me want to consume scores of mead and wild game while gallivanting throughout the yard swinging my magical sword battling horrific creatures of ancient antiquity.

But alas....I will just read it again someday.

Email ThisBlogThis!Share to TwitterShare to FacebookShare to Pinterest
Labels: Books

Lately I've been thinking a lot about building/planting a vegetable garden in the backyard. Maybe not anything too large scale with just tomatoes and potatoes to start with. I plan to do some loose documentation on the process here on briandean.net. I hope to finish my plans for the season by the end of the month (which I will put on the blog) so I can start real work in February.

Email ThisBlogThis!Share to TwitterShare to FacebookShare to Pinterest
Labels: Garden

Here's my new years resolution. I'm not really sure what constitutes as a resolution versus a goal so the following are just things I want for myself over the course of 2010.

1. Get in better physical condition while creating and maintaining a "real" exersise plan.
2. Obtain various industry certifications. I'm pretty close to my MCSA, then probably go for the E. If I didn't spend time finishing up PTC, I'd be done with it by now.
3. Simplify. I realise this is a pretty trendy thing right now, and pretty vague in general, but that shouldn't detract from the advantages of simplifying your lifestyle in general. I'd say this mainly pertains to possessions then commitments.
4. Spend more time with the Lord through scripture reading and prayer.

That's it for me. Hope you had a great new year, I sure did.